In a matter of a few hours, Hunter Box went from being a healthy, active 17-year-old, to a severely ill teen struggling for his next breath. After two hospitalizations, he was diagnosed with eosinophilic asthma and a rare complication called plastic bronchitis. Now, thanks to the Children’s Mercy Advanced Asthma Interdisciplinary Respiratory (AAIR) Clinic, Hunter’s asthma is under control.

“We were getting ready to leave for a trip to Florida the next day,” said Hunter’s mom, Kimi Box.

But first, Hunter had his school sports physical at 9 a.m. Though he’d had a random, dry cough for the past few days, he passed with flying colors, then ran a few errands.

When he returned home for lunch, his cough got worse. Kimi, who’s a nurse, gave him some over-the-counter cold medicine and suggested he get in the shower to see if the steam might help relieve his cough. She never could have imagined what would happen next.

“While Hunter was in the shower, he coughed really hard. When he came out, his neck was swollen, his voice sounded different and if you touched the skin on his face or neck, it would actually make a ‘crackling sound,’” Kimi described.

Recognizing how serious his symptoms might be, the Neosho, Mo., family immediately took Hunter to Mercy Hospital in nearby Joplin, Mo. “Hunter walked into the hospital on his own,” Kimi said. “But by 4:30 p.m., he was on a ventilator.”

Doctors at Mercy Hospital suspected Hunter had coughed so hard he had popped a hole in his lung, resulting in what’s called a pneumomediastinum, a critical condition that leads to air escaping from the lungs, airways or the chest cavity.

Hunter was struggling to breathe and needed a higher level of pediatric pulmonary care—care only available at the region’s premier pediatric hospital, Children’s Mercy Kansas City.

To get him there quickly, the staff at Mercy Hospital requested the Children’s Mercy Critical Care Transport team’s help. The team flew the hospital’s Lear jet to Joplin, taking their patient back to Kansas City. Kimi went with her son, while Hunter’s father, Aaron, made the three-hour drive.

“The crew on board the jet was amazing,” Kimi said. “They told me what to expect all along the way.”

Less than 30 minutes after picking Hunter up in Joplin, the jet touched down in Kansas City. Then Hunter was transported by ambulance from the downtown airport to the hospital, where he was admitted to the Pediatric Intensive Care Unit, or PICU.

There, Jade Tam-Williams, MD, a specialist in childhood lung diseases, met Hunter and his parents.

“The CT scan showed the air surrounding Hunter’s heart and neck from the pneumomediastinum. I suspected it was caused by a severe asthma attack,” Dr. Tam-Williams said. “It was a very scary situation.”

To improve Hunter’s breathing, Dr. Tam-Williams prescribed several medications, including steroids and albuterol. The next morning he was taken off the ventilator and his condition continued to get better. By Sunday morning, Hunter was out of the hospital and headed back to Neosho to continue recovering.

Despite following doctor’s orders carefully and severely restricting his activities, a few days later, Hunter seemed to be struggling to breathe again.

“Hunter acted like he was having an asthma attack at that point,” Kimi said. “His cough had come back, but this time, he was coughing something up. He told me it looked like worms.”

At the local emergency room, Hunter filled cup after cup with phlegm, or sputum, and Kimi took photos with her phone. After a breathing treatment, he was released to go home. Two days later, Hunter had a follow-up visit with Dr. Tam-Williams at Children’s Mercy.

While there, Kimi mentioned the trip to the local emergency room and showed Dr. Tam-Williams the worm-like substance Hunter had been coughing up.

Dr. Tam-Williams immediately recognized what was wrong, admitting her patient to the hospital just in the nick of time. Hunter was having another severe asthma attack.
“Hunter had developed a rare condition called plastic bronchitis, which can occur in patients with severe asthma,” Dr. Tam-Williams said.

Plastic bronchitis happens when the body’s lymph fluid builds in the airways and forms rubbery or caulk-like plugs, also known as “casts.” The casts can block the airways, making it hard to breathe. That’s what was happening to Hunter.

“These casts can be small, and when the patient coughs them up, they can look like strings, or as Hunter described them, worms,” Dr. Tam-Williams said. “If the casts get large enough, they can completely block the airway and can be life-threatening. We had to get these casts out of Hunter’s lungs as quickly as possible.”

Dr. Tam-Williams prescribed medications to help control the asthma, plus several times a day he wore a vest that vibrated his chest, loosening the casts and helping him cough them out on his own.

After four days, Hunter was breathing better and ready to go home. By now, it was late July—the beginning of football season and Hunter’s senior year in high school.

For the first few weeks after being released from the hospital, Hunter’s activities were severely limited—no football practices, no weightlifting, no show choir, no trips to the pool or the lake.

“Our goal was to slowly taper Hunter off his medications, while maintaining his breathing,” Kimi said.

The clinic brings together a team of experts to evaluate the factors that might be influencing a child’s asthma and address them with medications and lifestyle changes. The goal is to help each patient be healthy and free of any troublesome symptoms.

Dr. Tam-Williams is just one member of the AAIR Clinic team. Her partners include Nadine Mokhallati, MD, pediatric pulmonologist, Bridgette Jones, MD, pediatric allergist, and Kristen Welborn, nurse practitioner, as well as registered nurse coordinators, social worker, pharmacists, respiratory therapists who help with breathing tests and asthma education, and an environmental health nurse who helps to avoid possible triggers inside or outside the home.

“Unlike Hunter, many of the patients we see in the AAIR Clinic have struggled with asthma their entire lives,” Dr. Tam-Williams said. “Hunter looks like a healthy football player, but his asthma is life-threatening.”

Once Hunter’s initial health crisis had passed, his parents and Dr. Tam-Williams looked back to try to figure out what had triggered his asthma attacks.

Hunter had been diagnosed with mild asthma at age 3 or 4, but he had never experienced an attack nor been hospitalized for the condition.

And though no one knows what caused the life-threatening attack initially, Dr. Tam-Williams said Hunter has now been diagnosed with eosinophilic asthma. Eosinophilic asthma is a leading cause of severe asthma, affecting 50 to 60 percent of people with the severe form of the disease.

Like other forms of asthma, it causes inflamed airways blocked by fluid, mucus and spasms that make it difficult to breathe. But eosinophilic asthma involves abnormally high levels of a particular type of white blood cell called eosinophils, a part of the immune system that helps the body fight off infection.

“Because Hunter was very healthy until this happened, I suspect that he was able to accommodate quite well for the asthma,” Dr. Tam-Williams said. “He may have had a cough every once in a while, but it never seemed significant.”

Under the watchful eye of Dr. Tam-Williams and his parents, Hunter’s asthma is now well controlled. In addition to his other medicines, he takes a biologic medication that’s a monthly injectable called Nucala. Nucala is the only medication approved by the FDA to treat eosinophilic asthma.

“We picked this medication because it matches Hunter’s phenotype—it’s the right drug, at the right time, for the right kid,” Dr. Tam-Williams said.

But Dr. Tam-Williams said Hunter’s success goes beyond the medical treatment he’s received. Hunter and his family have recognized the limitations of his asthma, acknowledged them and worked toward a solution, making healthy changes to his lifestyle.

A few weeks after being released from the hospital, Hunter slowly returned to playing football. “There were times when it got hard to breathe,” Hunter said. “I had to know when to take a step back.”

Plus, Hunter’s team looked out for him. “One of my coaches carried an inhaler in his pocket for me, and they were always checking to see if I was alright,” he said.

After finishing the season, Hunter was voted by his teammates as best offensive lineman. He also got to go hunting last fall for deer and turkey.

At home, Aaron remodeled his son’s bedroom in their 100-year-old house. He sealed the room and installed an independent heating and air conditioning system.

In November, the family took their Florida trip, and now Hunter is singing and dancing in the school’s competitive show choir. In the spring, he’ll graduate from high school, then he plans to attend school at Crowder College in Neosho.

“Through this whole experience, I’ve learned not to try to act tough. Know when to seek help and step back,” Hunter said. “Dr. Tam-Williams said I will have to be aware of my asthma for the rest of my life. It’s important for me to stay on top of it.”

Though Kimi and Aaron are both in the health care field, they said they just didn’t recognize that Hunter’s asthma was acting up until it was almost too late.

“I’ve been a medic for 20 years, and I never dreamed this could happen,” Aaron said. “Hunter has always been a healthy, fit kid, and when he was struggling, he was compensating. He was making jokes and laughing, even though he was not doing well.”

Kimi agreed. “I think Hunter was far worse than we ever thought, but he covered it well, and we just didn’t recognize it.”

“Everyone at Children’s Mercy has taken excellent care of me,” Hunter said. “They taught us about what was going on, what could have caused this and how to avoid another attack in the future.”

“It was a holistic approach at Children’s Mercy,” Kimi said. “They took care of our entire family and the communication has been great. If we have any problems or questions, I can log onto the patient portal and get an answer from Dr. Tam-Williams or another member of the AAIR team immediately.”

“If it weren’t for Dr. Tam-Williams and Children’s Mercy,” Kimi said, “I don’t think we would still have Hunter.” 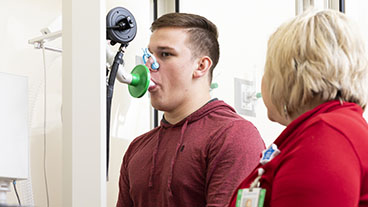 Learn more about asthma in kids
Allergy and Immunology Menu