The Link is a monthly print and digital newsletter that provides education to an audience of local, regional and national pediatric providers, on subjects related to current medical trends, developments in best practices and analysis of hot topics.

The free, award-winning publication is authored by Children's Mercy pediatric specialists, edited by Mary Anne Jackson, MD, and Angela Myers, MD, MPH, from the Division of Infectious Diseases, and produced by the Communications and Marketing Department. 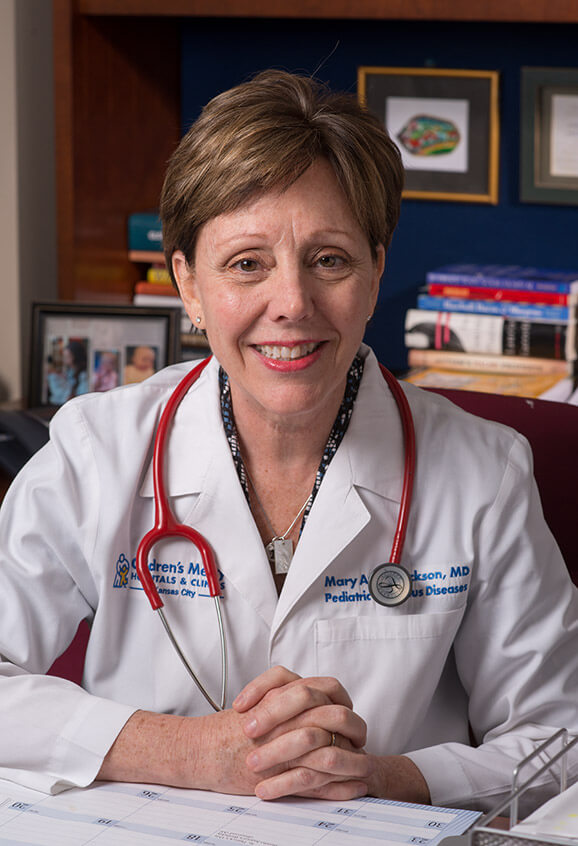 The Link is produced monthly by Communications and Marketing with editorial guidance from Mary Anne Jackson, MD, the Associate Chair of Community and Regional Physician Collaborations at Children's Mercy.

The columns and topics are provided by members of the Children's Mercy faculty and medical staff.

Stay connected with Children’s Mercy by subscribing to receive The Link electronically; delivered to your inbox each month! Printed copies of The Link will be discontinued in July 2020 and the issue will no longer be available via mailing.

Subscribe below to receive helpful tips for your practice and learn from experts at Children’s Mercy. Updates related to COVID-19 are being regularly published in this newsletter.

News and discussion from past issues of The Link

A 1-month-old girl presents with a right eye erythema and edema, along with yellow drainage over the past two days that has progressed to an inability to open the eye. The patient has not had fever and has been eating and stooling normally. She is mildly fussy, but not irritable or hard to console. Examination reveals edematous right eyelid with overlying erythema concentrated at the medial canthus with ability to express purulent drainage. Scleral injection is noted. Computed tomography did not show proptosis or abscess.

Of the following, the most likely diagnosis for this infant is:

A baby boy is born via repeat Cesarean section at 39 weeks gestational age after an unremarkable pregnancy. Prenatal labs were normal, including negative group B streptococcal testing. He was noted to have poor tone at birth, and developed respiratory distress shortly thereafter. Positive-pressure ventilation was trialed, but he was eventually intubated due to continued distress. His physical exam is remarkable for a narrow thorax and slightly bowed limbs. A chest radiograph is obtained, with the findings shown in the image. His parents are Mennonite, and they report that he had an older brother who died of a similar condition. Their other children are healthy.

Of the following, the clinical condition causing the patient’s symptoms is:

A 16-year-old female with history of bipolar disorder presents to the Emergency Department after intentional ingestion of forty, 450 mg tablets of extended-release lithium carbonate approximately three hours prior to presentation. She is alert and oriented and her vital signs are stable, but she is complaining of nausea. An IV is placed, ondansetron and isotonic fluids are administered. Lithium level is obtained and is 2 mEq/L. She is admitted, and upon arrival has a large episode of emesis.

Of the following, which is the most likely toxic reaction this patient will experience in the next 24 hours:

A 17-year-old male with a history of right leg hemi-hypertrophy and lymphedema presented with a history of vomiting followed by headache the next day. His symptoms progressed to include retrosternal chest pain and fever over the next two days. He was seen in an Emergency Department and then transferred following a chest X-ray (CXR) that revealed cardiomegaly and an electrocardiogram (ECG) that showed ST segment elevation in several leads.

Of the following the most likely organism responsible for this patient’s infection is:

A previously healthy, 12-month-old female presents with a rash. Parents first noticed red papules and vesicles on her trunk two days ago which have now spread in a clustered pattern to her face, back and extremities. The rash seems pruritic to the patient and she has had decreased appetite. She has been afebrile with normal urine output. There are no other household or daycare contacts with a similar rash. She received routine vaccines 10 days ago at her routine 12-month visit.

The most appropriate next step in management is:

A.    Refer patient to allergy/immunology for immune deficiency

B.    Contact avoidance with immunocompromised individuals until lesions have crusted