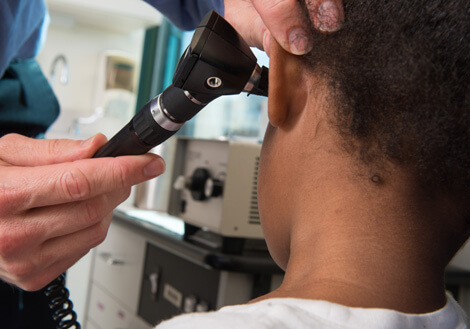 If ear infections are not treated in the proper time frame, several conditions can occur:

A hole or rupture in the eardrum, a thin membrane that separates the ear canal and the middle ear, is called a perforated eardrum. The medical term for eardrum is tympanic membrane. The middle ear is connected to the nose by the eustachian tube, which equalizes pressure in the middle ear. A perforated eardrum is often accompanied by decreased hearing and occasional discharge. Pain is usually not persistent. Learn how to care for your child with an eardrum perforation.

Infection spreads beyond the middle ear space to affect the mastoid bone of the skull (bone felt behind the ear). This bone may then fill with infected material and lead to a more severe infection.

A collection of skin and debris that forms a cyst behind the eardrum. This growth causes erosion of the hearing bones and can lead to several problems including hearing loss and chronic drainage from the ear. Surgery is required to treat this condition.