Future SARS-CoV-2 Seasons – Lessons to be Learned from Measles, Rotavirus and Influenza

Are predictions possible for our future as the SARS-CoV-2 vaccine becomes available based on currently known viral vaccine-preventable diseases, e.g., measles, influenza and rotavirus?1

Measles – a prototype for successful vaccine prevention. Before measles vaccine, there was reasonable “natural” herd immunity with most people having had the measles by the third or fourth grade. But each year a new birth cohort introduced another crop of ~3 million susceptible infants, diluting herd immunity. In the 1950s and early 1960s (pre-measles vaccine era), susceptible children had few contacts outside their extended family, staying mostly in their own neighborhoods until school age. Also, families uncommonly travelled beyond local areas. So, by today’s standards, their normal behavior would qualify as a measure of social distancing. This meant that each susceptible child’s annual risk of measles exposure was relatively low until school age. This low exposure risk kept case numbers low in many years, i.e., at a background rate. However, at two- to four-year intervals, the number of susceptibles would reach critical mass, accumulated from each year’s new birth cohort, so that exposure rates were sufficient to trigger a “peak year.” Hence the reported two- to four-year cycles of “bad measles years.”

Pre-vaccine measles patterns. But the periodicity/intensity of peak years varied between cities1 depending on city size and population density (indirect measures of exposure likelihood).2 Figure 1, Panel 1. For example, in the 1940s, “bad measles years” in Los Angeles (1.2 million population) had two- to three-year cycles with occasional smaller peaks in between, whereas cycles in Spokane, Wash. (100,000 population) were longer (three to four years) with consistently low background rates in between. London (8.5 million population) and New York (7.5 million) in contrast, had modest peaks every year. Interestingly, the larger peak height occurred with lower population densities (persons/square mile); peaks for London (13,000 persons/square mile and New York (9,000/square mile) were generally only half as high as for Los Angeles (~280 persons/square mile) and Spokane (~100/ square mile).3 Cumulative five-year per-population case numbers were similar regardless of the city size or density, but cases were more evenly dispersed year-to-year in larger cities (more likely exposures each year for each child) than in smaller less dense cities (fewer annual exposures until critical mass of susceptibles occurs). Figure 1 Panel 2.

Post-measles vaccine effects. The >90% effective measles vaccine dropped annual cases rapidly from 700,000/year by 90% (coincident with >90% vaccine uptake and evolving herd immunity). A blunted sawtooth pattern continued for five to six years before further dropping to background (<200 cases/year)5 until recently, as nearly all cases are due to vaccine hesitancy/refusal.

Rotavirus (RV). Similar to the large city measles pattern, RV’s pre-vaccine pattern was a high annual burden, with 3 million cases/year mostly in <3-year-olds, possibly due to frequent exposures, particularly in day care. Vaccine uptake is now 80-85% with pretty good herd immunity, so rampant winter-spring RV admission rates are a mere memory.4 Annual peaks were blunted the first three to five years post-vaccine release, with a sawtooth annual pattern (like measles). Figure 2. RV season now starts later in the year and occurs at low background levels (only tens of thousands); most cases are mild among the unimmunized 15-20% in small biennial peaks.

Lessons from measles and RV vaccines. The take-home from measles and RV seems to be that vaccine uptake sufficient to produce, or at least be close to, COVID-19 herd immunity (70-75%) should reduce COVID-19 disease/infections to blunted sawtooth peaks for a few years, and by 2025 to a low annual background rate, mostly in new birth cohorts and vaccine decliners.

Fly in the ointment - influenza. But wait, neither measles nor RV circulating strains have changed enough to produce circulating escape variants. What should we learn from influenza that frequently mutates into variants that escape existing vaccines? Note: we have never even come close to enough influenza vaccine uptake to reach herd immunity, so annually reported influenza vaccine effectiveness (19-60%)6 does not reflect the best that influenza vaccines could do, but a worst-case scenario. Because influenza circulates rampantly each year and each of us is likely intensely exposed dozens of times annually to someone shedding virus, influenza vaccine has never been able to show its potential effectiveness if we had >80% uptake, as is the case for RV or >90% as for measles.

That said, influenza vaccine seems a hybrid model, i.e., a vaccine of ~40-60% effectiveness with 40-60% national vaccine uptake (similar to some pessimistic surveys of SARS-CoV-2 vaccine acceptance) for a disease with high levels of community exposure (similar to measles in large cities before vaccine or RV in day cares). Unlike measles and RV, new influenza strains appear regularly from mutations or animal sources. So, influenza produces large annual outbreaks with severity depending on dominant circulating types and how good that year’s seasonal vaccine matched circulating strains.7 Yet influenza vaccine saves lives and reduces disease severity, despite a heavy annual disease burden. Still, influenza requires constant vigilance for new strains and frequent new combination vaccines, with annual vaccinations for the foreseeable future.

Expectations for SARS-CoV-2. COVID-19 cases, hospitalizations and deaths will drop by mid-summer 2021, but the new variants will fuel a fourth and maybe fifth resurgence. By end of 2021, expect ~85% of adults to be immune to the original strains, but <50% to new escape variants unless supplementary variant vaccines become available. Likely only 40-50% of children will be immune - almost exclusively via infection. Adult immunity will be from both infection and vaccines. New vaccines are already in development for the evolving variants, particularly the B.1.35 South African variant, for which current vaccines are less or not effective; and will come into use by the end of 2021. There will be pediatric authorization for at least one vaccine by the end of 2021. But as variants spread worldwide, a recommendation for a newer “variant vaccine,” either a single strain or multi-strain depending on how many escape mutants evolve, will mean a second vaccination series for most of us unless third-dose boosters prove protective against new variants, even for current vaccinees and those recovered from prior non-variant infections.

In 2022, the number of sawtooth disease surges will depend on how many escape mutants arise, how nimble vaccine producers can be to make corresponding new vaccines, and how much more the FDA can condense the testing/approval process (like the H1N1 pandemic where established methods allowed new vaccines in four months or so). Starting in 2023, annual SARS-CoV-2 vaccines are likely to be needed for the next few years (changing as the virus changes). The sooner we get the world burden of SARS-CoV-2 burden down to a small baseline rate, the less chances of even seeing more or more-virulent escape variants.

Bottom line: Vaccine and social mitigation will get the world to a better place by mid-2022, but immunizing not just the U.S., but the entire globe with vaccines against multiple circulating strains, plus rapidly implementing ad hoc vaccines for any newer variants, will be our ticket to a chance at “normalcy.”

Figure 1. Differences among cities in the height and frequency of historical measles cycles. Epidemics in smaller cities were larger with longer low-baseline-disease-rate intervals (Panel 1A and B) as in the low exposure model seen in Panel 2a. Larger cities had annual modest sized peaks (Panel 1C) with no low-disease-rate intervals as in the high/frequent exposure model in Panel 2b. Adapted from (1) and (2). 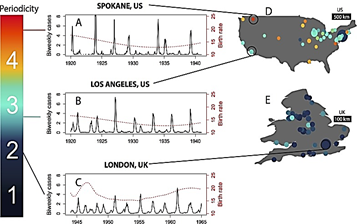 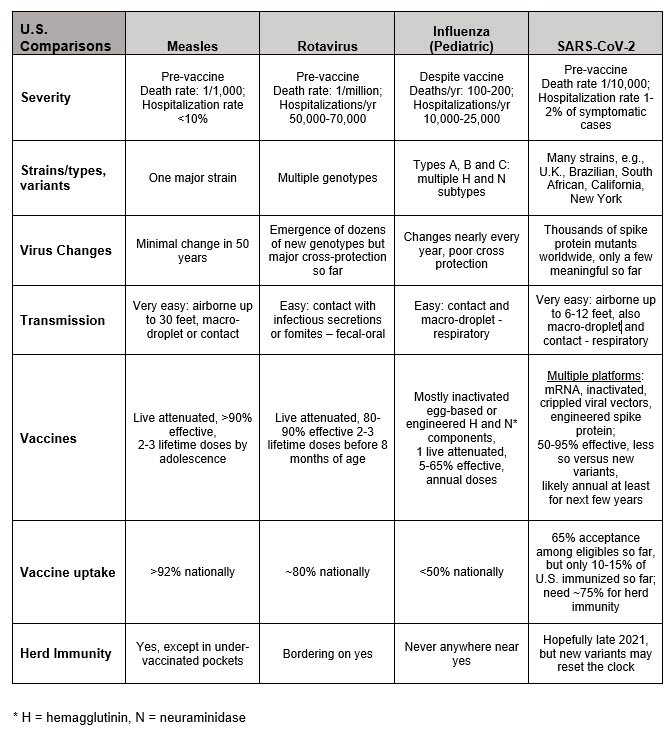