Pediatric data on the risk factors and outcomes of chronic kidney disease (CKD) is flourishing around the globe, in part thanks to Children’s Mercy’s Bradley Warady, MD, and his colleagues.

In 2003, Dr. Warady and his team joined forces with Dr. Susan Furth and her team, located at Children's Hospital of Philadelphia since 2010, to launch the Chronic Kidney Disease in Children Cohort Study (CKiD), a National Institutes of Health (NIH)-funded, prospective cohort investigation of children aged 6 months to 16 years with mild to moderately impaired kidney function. Focused on determining the risk factors for decline in kidney function, as well as defining how a progressive decline in kidney function impacts risk factors for cardiovascular disease, impaired neurocognitive function and behavior, and growth failure,  CKiD has exceeded original expectations. The study, which has now enrolled more than 1,000 participants, is currently funded through 2023, with Children’s Mercy receiving its latest $4.8 million in NIH funding in 2018.

“When we started this project almost 20 years ago, chronic kidney disease in children was very understudied,” said Dr. Warady, Division Director of Pediatric Nephrology and Director of Dialysis and Transplantation at Children’s Mercy. “We had no idea that CKiD would evolve into the seminal study it has become. We all felt grateful when we were funded for the first 5 years and we were passionate about our goal to generate important information that would enhance the study of CKD in children; but to think that we’re approaching two decades with continued funding from the NIH, to see all the impactful data  the study has generated, and to be able to feel the continued passion of our study’s investigators, coordinators and participants, it’s really beyond my wildest dreams.”

How data has improved outcomes

According to the National Institute of Diabetes and Digestive and Kidney Diseases (NIDDK), CKiD has evolved into an “international resource for the investigation of a variety of factors related to CKD in children,” that’s generated contributions to the care and treatment of children with CKD that include “updated and more accurate glomerular filtration rate estimating equations…resources designed to help estimate the CKD progression timeline, (and)...evidence that treatment of hypertension and proteinuria should continue as a primary strategies for slowing the rate of disease progression in children.”

The study has yielded a variety of discoveries.

Leaders in nephrology research and care

Dr. Warady said he feels a sense of pride when he considers how Children’s Mercy’s patients and staff have benefited from the hospital’s role as one of the two clinical coordinating centers (CCCs) in the CKiD Study.

I think that our patients also recognize the success we’ve had in the research arena, and they express feeling lucky to be cared for in a Division characterized by cutting-edge care based on high quality research like that produced by CKiD.

“I think our staff are proud of the fact that Children’s Mercy is one of the leaders of a globally recognized  study and I take great pride that a number of our faculty  have participated in the study by carrying out CKiD based research projects of their own,” Dr. Warady said.

“We’ve been ranked as one of the Top 10 pediatric Nephrology programs in the nation for the past 9 consecutive years …and based on my humble opinion, the rank is very well deserved based on the excellent treatment and outcomes experienced by our patients. And I think that our patients also recognize the success we’ve  had in the  research arena, and they express feeling lucky to be cared for in a Division characterized by cutting-edge care based on high quality research like that produced by CKiD.”

Next steps: including, combining and expanding perspectives

To date, CKiD has generated a great deal of information on risk factors for progression of CKD (e.g. age, sex, diagnosis, estimated kidney function, blood pressure, blood chemistry panels (albumin, lipids, anemia) and medications (ACEi/ARB therapy), as well as how CKD impacts several comorbidities, that is being shared worldwide. One of the keys to future discovery Dr. Warady said, is to incorporate more investigators outside the Nephrology community into the CKiD family.

“We need to collaborate with cardiologists, endocrinologists, and geneticists who together with our Nephrology investigators, can provide unique perspectives on analyses to be conducted with the data collected by CKiD. The work of endocrinologists and nephrologists combining efforts to better understand factors associated with the impaired growth of children with CKD is a great example of an opportunity that we look forward to pursuing. Much the same can be said for the investigation of comorbidities related to cardiology and genetics; together we can we better explain what is taking place in these kids with chronic kidney disease, which can then serve as the foundation upon which successful therapeutic interventions can be developed .”

Dr. Warady said that he is also encouraged about the developments in research focused on the patients who are transitioning from pediatric to adult care, since there is so much to learn from them.

“As patients move on to adult care, the question is: How do we keep those patients engaged in CKiD to see how they progress through young adulthood?” he said. “The potential benefits of continued longitudinal study of this unique patient cohort are enormous. Of course, it’s also a question of fiscal support, because it requires substantial funding to follow hundreds and hundreds of children long-term at more than 50 participating sites.”

Dr. Warady emphasizes that no matter what form the investigation takes, any success experienced in a clinical research setting is a direct result of the contributions from patients and their families, and the commitment of the research team.

“Having the right team is what it’s all about; whether it’s the research coordinator carrying out an in-person visit with a study participant, or the person conducting administrative oversight of the project, having the right people on bus is critical,” he said. “I have been a clinical researcher for nearly four decades, and I can tell you with confidence that the most important characteristics of a successful research team are the ability for members to work well with one another and for the team to have a  passion for the work being accomplished. We have a terrific team in the Division of Nephrology at Children’s Mercy; everyone is passionate and dedicated to excellence in research, with an overarching goal of  helping clinicians deliver not just the best care in here in Kansas City, but everywhere throughout  the world.” 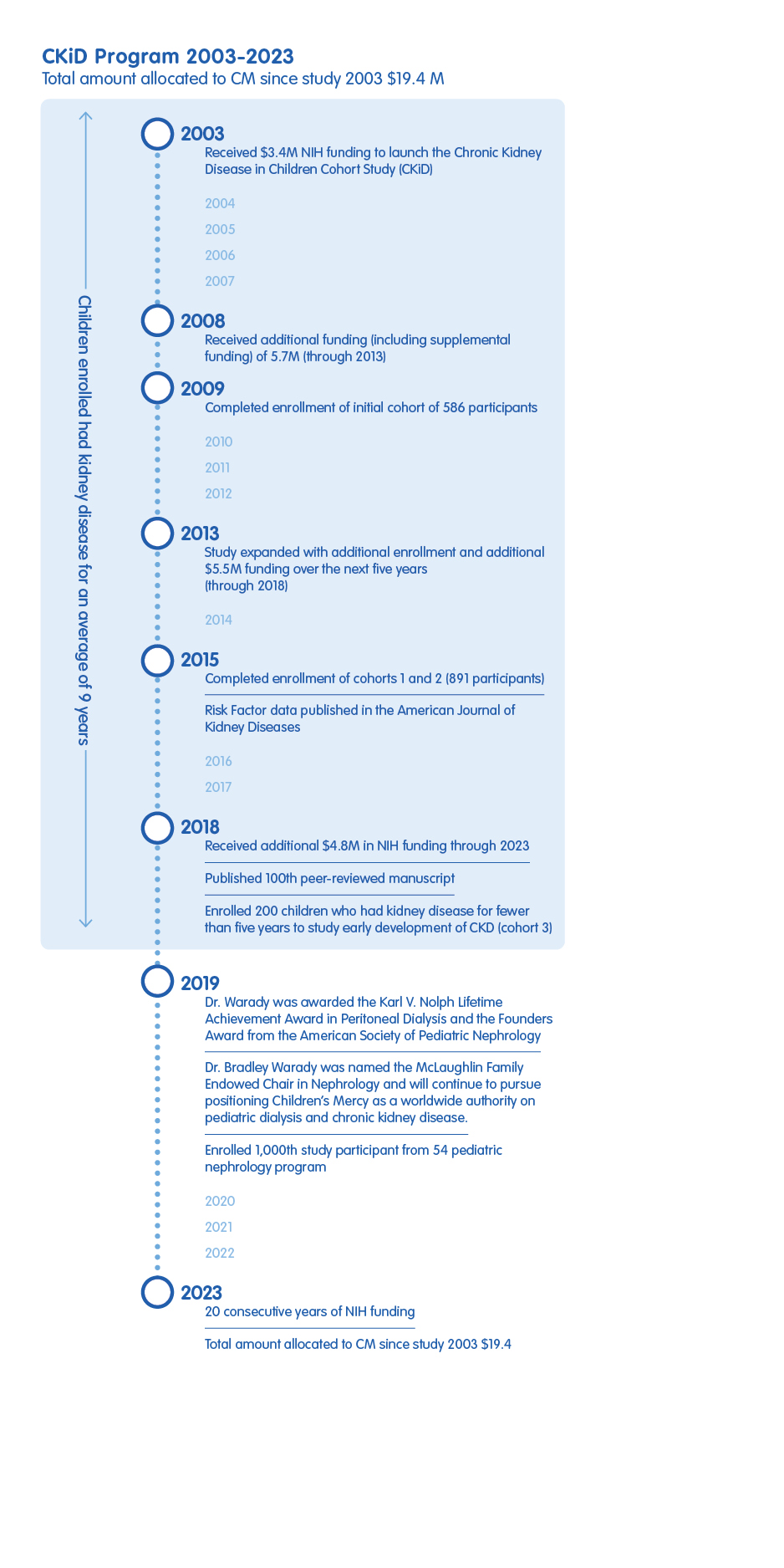