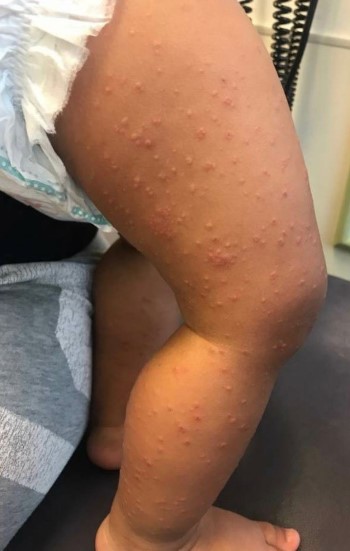 A previously healthy 14-month-old male presents to clinic with a rash that started approximately two weeks ago and is predominantly located on both legs. He has associated mild rhinorrhea, cough and loose stools, but no fever. The rash is also located on the cheeks and buttocks, but spares the abdomen. The patient has been scratching at the rash occasionally. He missed his 12-month-old well check so has not yet initiated live vaccines. Mom is concerned because the rash is not improving and seems to be getting worse.

Which of the following would be the most appropriate initial management?

The correct answer is B.

The rash is most consistent with Gianotti-Crosti Syndrome.

Gianotti-Crosti Syndrome (GCS) is also referred to as papular acrodermatitis. It often goes unrecognized since it is broadly diagnosed as a viral exanthem.1 It is most common in children under age 5, with an equal predominance between males and females.2

Diagnosis is made clinically by the classic presentation of abrupt onset of rash localized to the face, extensor surfaces of lower extremities and buttocks, with sparing of the trunk.  The rash normally consists of dome-shaped, flat-topped papules ranging in size from 1-10 mm, but confluence of the lesions may appear as edematous plaques. The papules can be skin colored, erythematous or purpuric. The rash will typically resolve with two to three weeks but can be persistent more than two months. Some patients will also have associated lymphadenopathy and low-grade fever.3

GCS has an association with Hepatitis B infection, but this is a rare cause in the United States and other countries where Hepatitis B vaccine is administered routinely at birth.  The exact etiology is unclear, but is typically associated with viral infections including EBV, CMV, adenovirus, rotavirus, enteroviruses and RSV.1,2

Treatment is supportive, including topical agents like calamine lotion and systemic antihistamines for persistent pruritis. Topical steroids are not typically recommended, but may be helpful for severe pruritis.2