A 17-year-old boy presents with lethargy and poor oral intake. His mother reports that he has been feeling sad and had a depressed mood for the past year. His mother has noted he has lost weight and he has not been eating as much as usual. She isn’t sure of his exact dietary history, but thinks he may sometimes go days without eating. His exam is significant for fatigue and slowed response to questions, but is otherwise normal. Review of systems is otherwise negative. His growth chart is reviewed.

Of the following, which electrolyte abnormality is he at risk for if his caloric intake is aggressively increased?

The adolescent is at risk for refeeding syndrome, which is associated with hypokalemia, hypomagnesemia, and hypophosphatemia.

Refeeding syndrome is a condition associated with an aggressive increase in nutritional intake in a malnourished patient resulting in shifting fluid, glucose and electrolytes. When the body experiences starvation, there is a shift in the metabolism to protein and fat catabolism to provide glucose and ketones for energy, leading to depletion of intracellular electrolytes, decreased insulin secretion, decreased metabolic rate, decreased growth, decreased muscle mass and organ mass including cardiac, lungs, intestines, liver and kidney. When nutrition is reintroduced, metabolism shifts back to carbohydrate metabolism with glucose as the primary source of energy instead of fat and protein. The increased blood glucose level causes a higher release of insulin and increased cellular intake of glucose, magnesium, phosphorus and potassium, and increased retention of sodium leading to extracellular fluid volume expansion.

The incidence of refeeding syndrome in pediatrics is unknown and the key to identification and prevention is a high index of suspicion. Risk factors for refeeding syndrome include prolonged starvation, weight loss of 5-10% of body weight, or weight less than 80% of ideal body weight. Clinical manifestations include the symptoms of the electrolyte abnormalities and fluid shifts.

Hypophosphatemia is the hallmark of refeeding syndrome and can result in muscle weakness, muscle cramps or seizures. Muscles affected can include respiratory muscles leading to impaired ventilation. Severe manifestations can also include altered mental status, rhabdomyolysis and hemolysis. Hypokalemia can result in arrhythmias, muscular weakness, rhabdomyolysis and respiratory impairment. Hypomagnesemia can result in weakness, seizures, altered mental status, arrhythmia, vomiting and diarrhea. Sodium retention can lead to fluid overload causing pulmonary edema and congestive heart failure. The risk of refeeding syndrome begins 24 to 72 hours after the reinitiating of nutrition and typically presents within the first week. 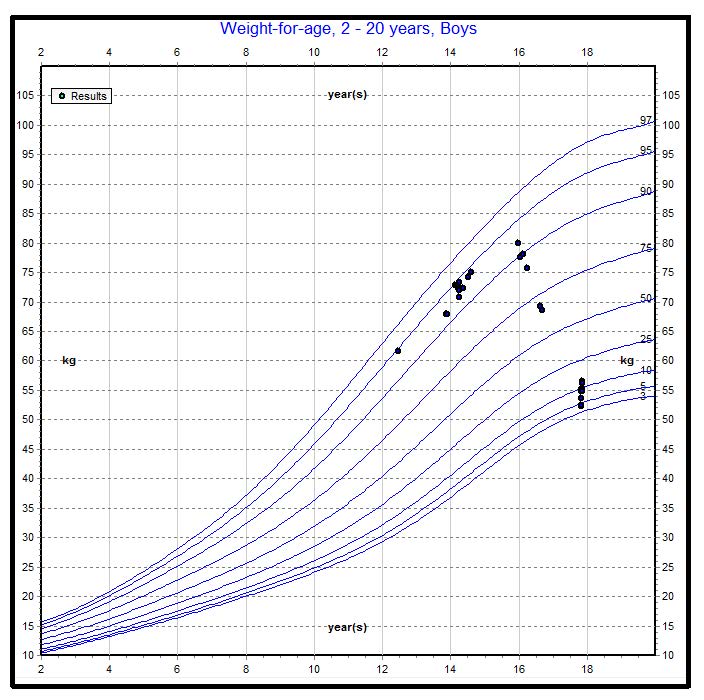 Treatment begins with recognizing at-risk patients and starting the reintroduction of nutrition gradually. Beginning at 25-75% of the estimated energy requirements and advancing slowly by 10-25% increase in calories each day can reduce the risk of refeeding syndrome in at-risk patients. Electrolytes should be monitored closely and repleted as needed during nutritional rehabilitation. If a patient develops refeeding syndrome, slowing or stopping the advancement of caloric intake should be strongly considered to prevent worsening of electrolyte abnormalities.