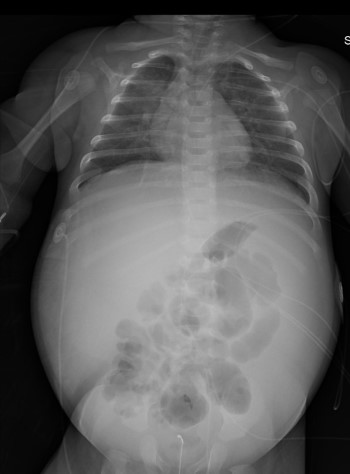 Figure 1.  AP of the chest and abdomen

A 3-month-old boy presented with an eight-day history of fever and malaise. Chest radiograph revealed enlargement of the liver and spleen, which was confirmed on examination. (Figure 1) He developed vomiting over the next 24 hours and was referred for admission after his abdominal distension increased. He was noted to have pancytopenia (WBC 2.6 cells/mcL, Hgb 9.1 gm/dL, platelets 52 cells/mcL) at hospital admission, and was transferred to the PICU for further management. Peripheral smear showed a few atypical lymphocytes and no blasts. HIV testing was negative, B cell, T cell, and NK function were found to be normal on flow cytometry.

Of the following, the most likely diagnosis in this patient is:

Due to concern for a potential oncologic process or possibly hemphagocytic lymphohistiocytosis (HLH), a bone marrow biopsy was performed. The histopathology results of the biopsy revealed small yeasts with narrow-based budding on Gomorri methenamine silver stain, consistent with Histoplasma capsulatum. 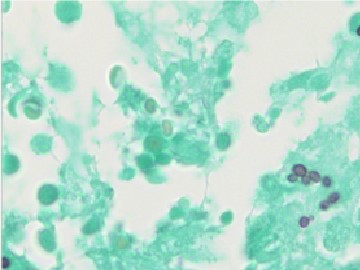 H capsulatum is a soil-based fungus that is endemic to the Ohio River Valley region of the United States. While the majority of infections are asymptomatic, the most common route of infection is inhalation, and higher inoculums are associated with greater risk of symptomatic infection. Areas where there is large soil turnover (e.g., construction sites), chicken coops and caves with bats, generally have higher quantities of H. capsulatum in the air.

Progressive disseminated histoplasmosis (PDH) is a rare, life-threatening infection occurring in immunocompromised individuals and young infants. It is thought that a large inoculum is inhaled, causing severe infection that overwhelms the host immune response, leading to dissemination. The patient in the above vignette had recently visited a relative who had large, uprooted trees and chickens.

The onset of symptoms is typically abrupt and characterized by fever and malaise, followed by near universal hepatosplenomegaly. Weight loss and cough are also common features and chest radiograph may reveal a patchy pneumonitis with perihilar lymph node enlargement. Pantycopenia occurs in 80% of patients. Transaminitis is also common. Liposomal amphotericin B is the treatment of choice initially for PDH, with transition to oral itraconazole to complete 12 weeks of therapy.

The patient had a prolonged febrile course before diagnosis and incomplete Kawasaki Disease (KD) should be considered in infants with prolonged fevers, even in the absence of KD exam findings. However, hepatosplenomegaly is not a feature of KD, making this less likely.  Epstein-Barr virus is known to cause fever, malaise, hepatosplenomegaly and atypical lymphocytosis, but this generally occurs in older children and adolescents. HLH has a similar presentation to PDH, as well as lab findings with pancytopenia, but low or absent NK cell function is usually present. Additionally, hemophagocytosis is found on the bone marrow biopsy in the setting of HLH.