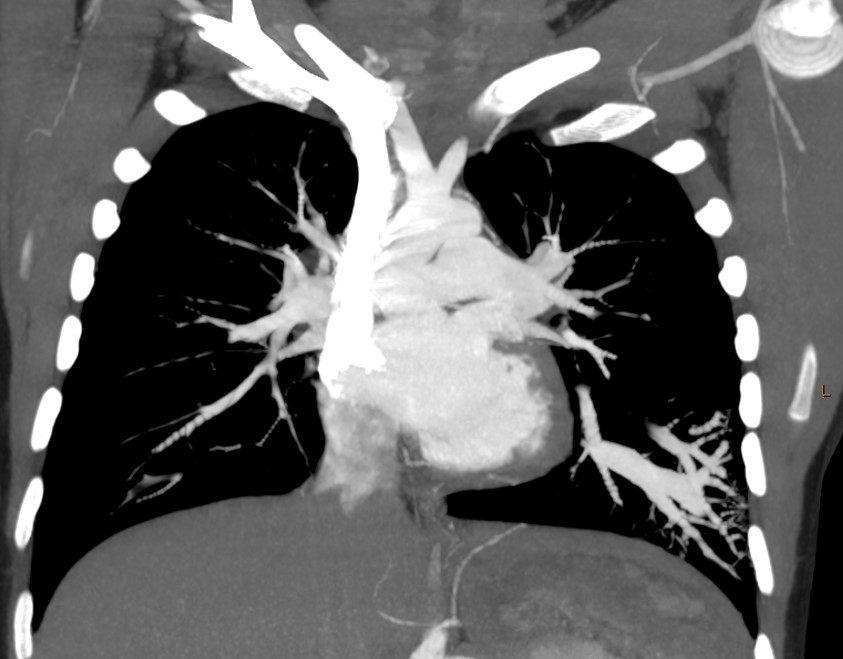 An 11-year-old girl with a history of epistaxis is hospitalized due to hypoxia due to presumed left lower lobe bacterial pneumonia. Following 72 hours of antibiotic therapy, she has not improved and continues to have hypoxemia and dyspnea with exertion, but no symptoms at rest. She has been afebrile during the course of her illness. Physical examination reveals focal crackles in the left lower lung fields without retractions or tachypnea. Further evaluation with CT scan with contrast of her chest is completed.

Of the following, what genetic condition is associated with this finding?

HHT, also called Osler-Weber-Rendu Syndrome, is an autosomal dominant disorder which leads to multiple vascular malformations of the skin, mucous membranes, and viscera.1 The prevalence of HHT is estimated to be more than 1 million people worldwide.2 There are multiple genes associated with HHT with the most common mutation being of the ENG gene, located on chromosome 9, which is responsible for cell signaling associated with cell proliferation and survival and affecting angiogenesis.2

Chronic epistaxis is the most common presenting symptom and other symptoms include telangiectasias, a small dilated blood vessel near the skin or mucosal surface, of the tongue, lips, face, conjunctiva, ears or fingers. Additionally AVMs, a direct connection between arteries and veins without normal capillary beds, may be present in the liver, lungs or brain.1,3 Pulmonary AVM affects more than half of patients with HHT, while about one-third have liver AVM, and about 10 percent have cerebral AVM.3 Pulmonary AVM causes right to left shunting of blood and results in hypoxemia and can lead to polycythemia and digital clubbing but often does not cause respiratory symptoms.3

Gastrointestinal bleeding also affects about one-third of patients, typically presents in adulthood, and can lead to anemia.2 Thromboembolism through an AVM may result in cerebrovascular accident.2 Liver AVM is often asymptomatic, but can lead to heart failure or liver cirrhosis.2

Diagnosis is established by history, physical examination, and evaluation for vascular malformations. Consensus diagnostic criteria have been suggested including:

Presence of three out of four criteria are needed for the diagnosis. Additionally, genetic testing for the genes associated with HHT is available. Other disorders to consider in the differential diagnosis of HHT include CRST syndrome (calcinosis, Raynaud syndrome, sclerodactyly, telangiectasia), von Willebrand disease, and ataxia telangiectasia.1 If HHT is suspected, evaluation for vascular abnormalities is needed including lungs, liver, gastrointestinal tract and brain to determine if treatment, including embolization, is needed and continued surveillance for AMVs is indicated.