Figure 1. Final calculation of Vaccine Effectiveness (VE) for the USA overall, for A subtypes and for all B strains. 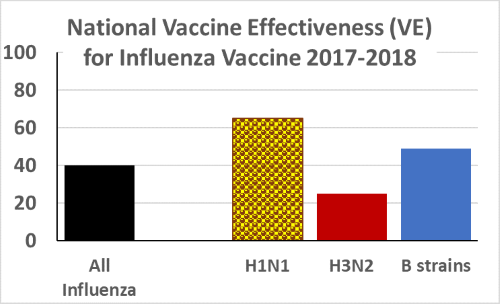 VE measures the reduction in needing medical care for influenza. One concern was that small mutations noted in vaccine viruses grown in eggs might have made eIIV3 slightly mismatched for circulating wild type influenza. In contrast, vaccine viruses in the FDA-approved cIIV4, Flucelvax® did not seem to have these mutations.

Should cIIV4 be preferred? Despite a hint that cell-based vaccines may be superior in some populations for A viruses, particularly A-H3N2, neither the CDC nor the AAP preferentially recommended cIIV4.

This season so far seems an A-H1N1 and Yamagata B-dominant year. Note that both vaccines performed well against these viruses and so far circulating strains match the vaccine strains.

My take is that the biggest difference between cIIV4 and eIIV3 VE last year was the extra B strain, not some possible mild effect of the method for growing vaccine viruses. My preference is any age-approved quadrivalent vaccine because two B strains lessens chances of vulnerability to the second B circulating strain (like last year).

But don’t postpone immunizing if only IIV3 is available. Hopefully, another year to evaluate cIIV versus eIIV will clarify whether cIIV adds extra protection or not.