The September Pediatrics issue was three-times-a-winner, as they say in horse racing, with good news for those who do their best to keep current on the latest data on vaccine issues.

Authors from the Harvard School of Public Health addressed concerns that legislation aiming to raise HPV vaccination rates (mandates for HPV education or for vaccine administration) could increase promiscuity or pregnancies among sexually active teens.

Using 14 years data from the Youth Risk Behavior Surveillance System on prevalence of sexual intercourse in the three months prior to each annual survey, and also rate of condom use during the last sexual experience, the authors controlled for unemployment rates, teenage pregnancies, sexually transmitted diseases, participation in Children’s Health Insurance Program (CHIP) and Medicaid, and political party that controlled the state legislatures and governorship. Data were compared in states that did and did not implement HPV vaccine legislation. Interestingly, Missouri was among the legislation states (educational law) and Kansas was in the non-legislation states.

Among 715,338 high school students reporting intercourse in the three months prior the survey, intercourse decreased somewhat. Among 217,077 currently sexually active teens, condom use increased somewhat. Neither reached significance, (P=0.21 and 0.32 respectively). Regardless, legislation did not increase reported sexual activity. 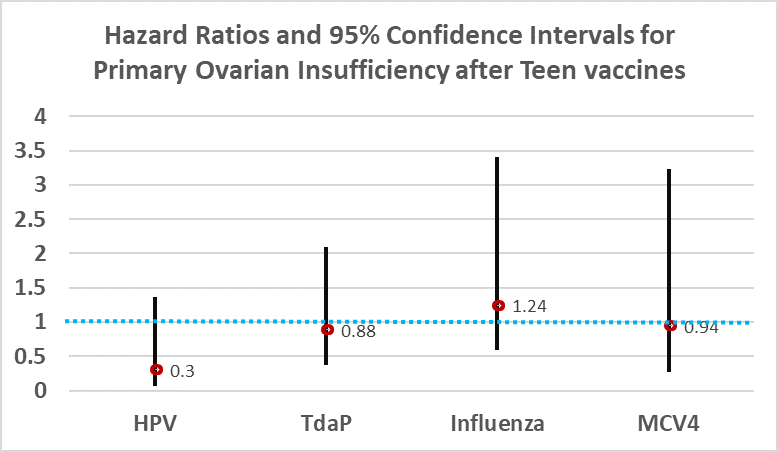 Note: the influenza vaccine hazard ratio at first glance looks worse than controls, but the lower confidence interval being <1.0 indicates that it is not significantly different from controls, i.e., no increased risk.

Another Kaiser Permanente data review, 2012-2015, revealed increasing rates of prenatal TdaP administration (26% in 2012 to 79% in 2014). Among 109,536 pregnancies, 81,993 were analyzed (excluded chromosomal abnormalities, congenital anomalies and lost to follow-up infants).

Mean gestational age at TdaP receipt was 28 weeks. Vaccines were more likely Asian American/Pacific Islanders, to have >bachelor’s degree education, influenza-vaccinated prenatally, first pregnancies and term deliveries. Infant follow-up was 1.2 to 6.5 years. ASD declined year-to-year from 2.0% to 1.5% in unvaccinated and 1.8% to 1.2% in vaccinated infants. The hazard ratio for vaccinated mothers’ infants was lower (0.85, 95% CI: 0.77–0.95) versus unvaccinated mothers’ infants. Subset analyses also showed almost no variability by year of birth or maternal parity. So, the concern of some critics about maternal “immune activation” by Tdap causing added risk for ASD diagnosis was not validated.

With the best information comes the best decisions. With these additional data, we can now provide more answers for those families who are conflicted about vaccine issues.