Estimates of the influenza burden in the U.S. are approximately $55 billion in an average year for direct, indirect and societal costs.1 Recent data suggest that the egg-based 2018-19 influenza vaccine could have vaccine effectiveness (VE) as low as 20 percent against H3N2 infection, while still having approximately 50-60 percent effectiveness against H1N1 and influenza B infection. These data could discourage medical providers from actively recommending vaccine this season, and the public may be less accepting of vaccine. But there is a powerful reason to continue to aggressively recommend seasonal vaccine.

A recent report 2 projected the benefits to the United States from such a sub-optimal influenza vaccine in a “typical” vaccine uptake year, given the expected availability of 140 million vaccine doses. Compared with no vaccination, typical uptake of a vaccine with 20 percent vaccine effectiveness (the estimate for the 2018-19 seasonal vaccine against H3N2) should still notably impact influenza-related infections, hospitalizations and deaths. For example, given 43 percent of the population receiving influenza vaccine in a typical year and 20 percent VE, the benefits project to 20.99 million fewer influenza infections, 129,701 fewer hospitalizations, and 61,812 fewer deaths (REF), saving almost $5 billion. Costs of vaccinating the U.S. against influenza are estimated to average $2.5 billion.

If we need an incentive to strongly recommend the vaccine, consider that a 7 percent increase in uptake to 50 percent even with a “sub-optimal” vaccine, would prevent another 3.63 million infections, 21,987 hospitalizations and 8,479 deaths.

Of interest, this study projected that mortality reduction is more responsive to relatively small overall changes in coverage than to changes in VE. Further, distributing the 140 million doses with emphasis on certain age groups could improve benefits of a vaccine almost twofold. Specifically, 140 million doses of a 20 percent VE vaccine could avert 39.10 million infections, 235,059 hospitalizations, and 85,734 deaths if 80 percent of vaccine doses were administered to <5-year-olds and >60-year-olds, the populations most vulnerable to severe disease and death. 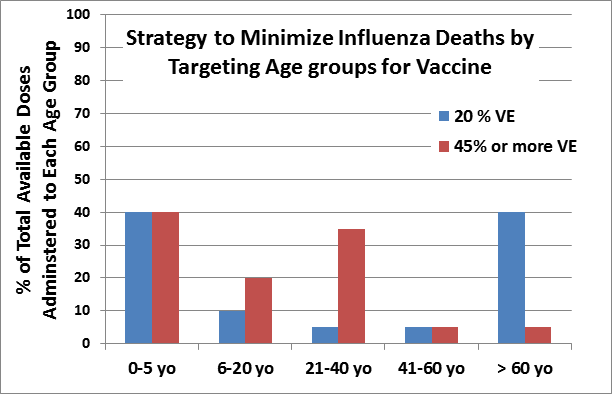 For an influenza vaccine with a VE of 45 percent or greater, however (2018-2019 H1N1 and Influenza B vaccine components are in this relative range), minimizing deaths would occur by administering most doses to those less than 40 years old, targeting the ”spreaders” of infection rather than the those with more severe outcomes. (Fig. 1)

But nothing is so simple. The three or four virus strains in the vaccine each have different VE, so 2018-19 is a mixed VE vaccine, so the proposed strategy that is best for H3N2 is not best for H1N1 or B strains. But the bottom line is most children get their influenza vaccine at their primary care provider’s office or clinic.3 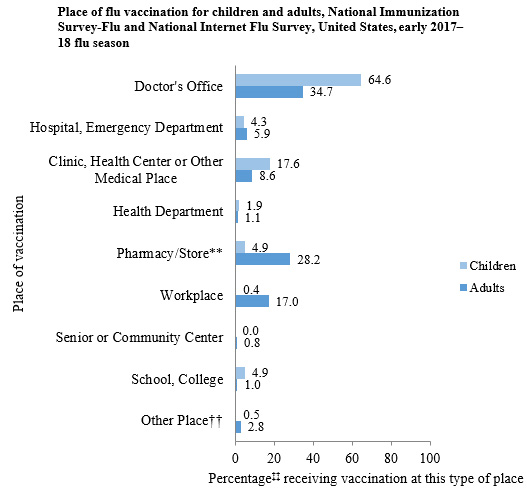 So we have the most power to improve overall benefits of the vaccine by strongly recommending the vaccine. A 7 percent increase in uptake adds approximately 30 percent more benefit, and all strategies to optimize benefits include at least 40 percent of vaccine doses going to those under 5 years old.
So while last season seemed discouraging, remember how much good you did with even a sub-optimal vaccine. Use your vaccine power again this coming year. As Spiderman’s uncle once said, “With great power comes great responsibility.”