Will Influenza Vaccine Effectiveness (VE) for the 2018-2019 Influenza Season be Good This Year?

A recent report from Canada1 used the same methodology as does the Centers for Disease Control and Prevention (CDC) for U.S. data. Their interim VE for the first half of this season is 72% protection (95% CI = 60-81%) against influenza A (H1N1)pdm09, the dominant circulating influenza type, and 69% for any type of influenza. Happily, the relatively high protection rate also includes children. This is substantially better than the 24-50% VE for the 2017-2018 season. So why is protection so good in Canada so far?

There are concerns that repeated annual seasonal vaccine may lower antibody responses and lead to faster waning during influenza season. Should VE be worse after repeated influenza A(H1N1)pdm09 vaccine(same vaccine strain for 10 years) in an H1N1- dominant season? This year should be the poster child for low VE. But two recent reports about seasonal A (H1N1)pdm09 vaccine add reassuring insights for our current, although imperfect, vaccine.

A Dutch group2 reviewed influenza-like illnesses (ILI) after repeated influenza immunization in asthmatic children. ILI did not increase after seasonal vaccine given annually for up to four consecutive years. In fact, ILI decreased by 49% versus those receiving only one influenza vaccine in the studied year. This suggests that in asthmatic children at least, consecutive annual immunization does not diminish, and may even increase protection.

Another study3 of antibody in ~3,000 sera from before and after repeated annual influenza vaccine in 464 patients >13 years of age (76% white, 59% female) showed that peak titers were not significantly different after initial versus subsequent annual doses.

HAI titer >1:40 is surrogate of protection from symptomatic influenza illness.
*   Not significantly different

However, antibody decay was somewhat faster with subsequent annual doses. Table 1. Given a 1:40 titer is considered “protective,” there would be close to three years’ “protection” after an initial dose, but still a full season’s protection after the seventh annual dose.

So is it a total surprise that the preliminary Canadian VE is better in an A(H1N1)pnd09 dominated year than in past years? Maybe not. The reasons include: 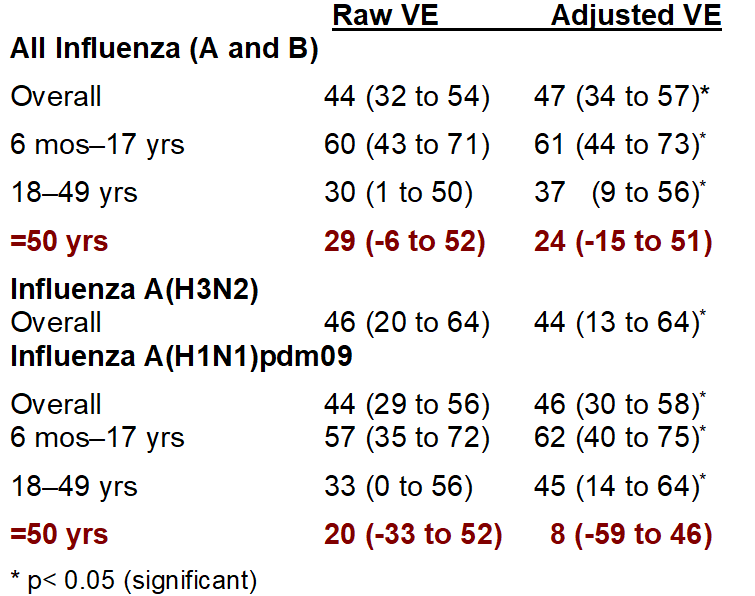 The U.S. data set is larger, so it may be more accurate. U.S. data contains more outpatient in relation to inpatient data than Canadian data, so VE may end up being similar if we only considered inpatients. There is much higher use of live attenuated influenza vaccine (LAIV) in Canada, and we don’t know about use of high-dose or cell-bases vaccines, which are minimally more effective than standard egg-based vaccines, so that may be a factor. Finally, there is a remarkable similarity in U.S. and Canadian VE for children.

So, we hope that the robust VE initially reported in Canada will also be true in final reports from both countries. Regardless, we can feel good about all the effort we put into immunizing as many of our pediatric patients as possible. The most benefit seems to be in just that age group, regardless of which report you want to believe.