Pertussis in the first six months of life has the highest morbidity and mortality.1 Vaccine-induced protection against pertussis from current infant vaccine schedules is absent in the first months and is not fully developed until after 7 months of age, although there is some protection even with one dose.2 Repeated attempts at protecting these younger infants have included neonatal immunization, cocooning and maternal third trimester TdaP. Neonatal immunization with TdaP has produced mixed results in studies so far. There have been concerns that maternal antibody blunts pertussis vaccine response in newborns and that pertussis vaccine may alter subsequent responses to vaccines already in the current infant schedule. Some also theorize that poor vaccine response3 may be due to the D and T components. So, another strategy could be monovalent acellular pertussis vaccine (maP) at birth.

Recently, an Australian group randomized 440 term healthy newborns to receive at birth maP vaccine plus hepatitis B vaccine (HBV) or HBV alone (417 completed the study; N=212 with maP+ HBV and N=205 HBV only).4 The investigational aP vaccine contained pertussis toxin (PT) 25µg, pertactin (PRN) 8 µg, filamentous haemagglutinin (FHA) 25 µg and 0.5 mg aluminum hydroxide from GlaxoSmithKline. The authors evaluated safety plus antibody responses to both pertussis antigens and to standard infant vaccines (using the Australian schedule, which is a bit different than the U.S. schedule). Titers were assayed at 6, 10, 24, and 32 weeks of age. Infants were stratified for analysis based on maternal receipt of any aP-containing vaccine or maternal pertussis disease within the past five years.

Local and systemic adverse events were similar between both groups at all time points. 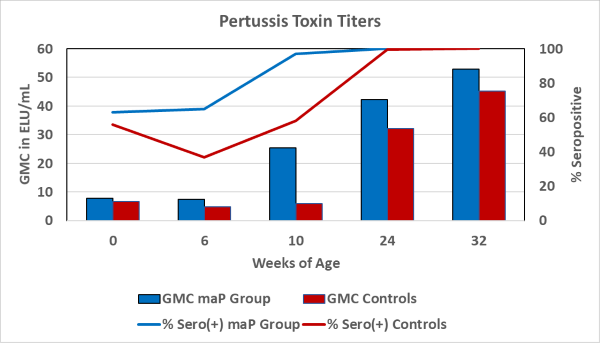 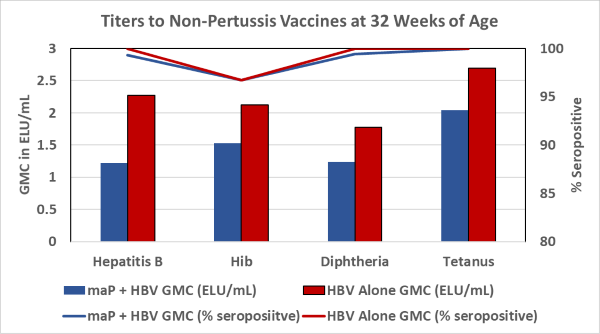 Lower titers to other vaccines, but still in protective range. There was, however, significantly lower GMC to Hib, hepatitis B, diphtheria and tetanus antigens in the maP group. These lower concentrations were still above thresholds expected to be protective. Titers to PCV-13 antigens were not significantly different between groups.

Bottom Line: Neonatally dosed maP vaccine appears safe while being immunogenic, and increases both the percent seropositive rate, as well as total titers to pertussis antigens. Perhaps all we needed was to drop the D and T components to get neonates to respond well to neonatally dosed pertussis antigens. The maP vaccine could be a useful part of our vaccine armamentarium, particularly for infants of mothers who had not received Tdap during pregnancy. Of course, such a vaccine is likely three to five years away, so in the meantime, maternal third trimester Tdap is our best tool to prevent severe pertussis in young infants.

Geometric mean concentrations (GMC) are represented as bars on the left axis and percent sero-response on the right axis. Hepatitis B GMC is in thousands of ELU to allow fit on axis comparable to other antigens.