Throughout the U.S., we are entering the 12th week* of the 2018-2019 influenza season. Dr. Chris Harrison’s article in the January edition of The LINK identified that influenza A (H1N1) pdm09 virus predominated early on in the season. There appeared to be a good match between the antigenically characterized circulating strain and the A/Michigan/45/2015 component of the 2018-2019 North Hemisphere influenza vaccines.

Current surveillance data describing influenza-like illness and hospitalizations show influenza disease remains widespread through most of the U.S., including Missouri and Kansas. While influenza A (H1N1) pdm09 virus continues to circulate, influenza A (H3N2) virus has recently emerged as a second wave and is the current predominant strain. With the mix of H1N1 and H3N2, vaccine effectiveness has been re-estimated to be closer to 48%.

Influenza A (H3N2) tends to be more severe and more often associated with bacterial co-infection. Over the last four weeks, our microbiology laboratory has identified that 70% of characterized influenza viruses are H3N2 strains. In addition, multiple other respiratory viruses are co-circulating in lower numbers** including RSV, metapneumovirus, adenovirus, parainfluenza viruses, rhino/enteroviruses, and coronaviruses. This is making for a very busy end-of-winter season for pediatric practitioners. 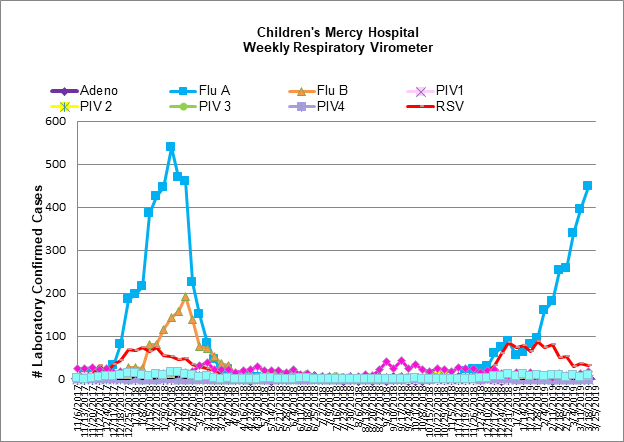 Influenza alone accounts for high rates of respiratory disease among older adults (90.8% with an underlying medical condition) and children between the ages of 1 and 4 years (45% with an underlying medical condition) factoring into our current season projections of 25 million illnesses, 12 million medical visits for influenza, upward of 350,000 hospitalizations and 31,000 deaths.

As of March 16, 2019, 76 pediatric deaths had occurred this season, with nearly one-half in those ages 5-11 years, and 23.4% in the 2-4 year-old-age group, and about one-half were otherwise healthy children. With influenza A (H3N2) disease now a predominant factor, it is likely we will see deaths in children increase. As in most seasons, invasive bacterial infection is a contributing factor in almost 60% of children who have died. While on average, vaccine coverage among children ≥6 months is in the range of 60%, most children who have died in past seasons had not received influenza vaccination. In a study of 675 influenza deaths in children reported during 2010-2011 and 2015-2016, only 31% of children who died had received any doses of influenza vaccine.1

Influenza A in particular increases the adherence of Staphylococcus aureus, Streptococcus pneumoniae and Haemophilus influenzae to pharyngeal cells, contributing to the role of these pathogens in influenza-associated bacterial secondary infection. In addition, Group A streptococcus and Neisseria meningitidis disease are associated with bacterial-influenza co-infection. These two pathogens in particular can be associated with fulminant rapidly progressive infection and death.

As we enter the latter stage of respiratory viral season, practitioners will continue to see a high volume of patients with respiratory complaints. Differentiating the child with simple viral URI from those with the more serious complications of influenza is paramount. Practitioners need to be vigilant, and consider bacterial superinfection in their differential. With that in mind, identification of those with signs of sepsis is critical, knowing that children can deteriorate rapidly. Children with influenza and bacterial co-infection, especially in those with pneumonia, are at higher risk of respiratory failure and septic shock.

Most clinicians know what to look for. Though not all septic children will be febrile, nearly all will have tachycardia and /or tachypnea >2 SD above normal for age. Hypotension should trigger further evaluation. Thrombocytopenia, leukocytosis or leukopenia and elevated inflammatory markers should raise concern for bacterial superinfection. Children with decreased mental status and decreased perfusion/prolonged capillary refill need immediate resuscitation efforts and initiation of antibiotics.

Lastly, we need to continue efforts to immunize patients who have not yet received influenza vaccination. Early season estimates of vaccine coverage for children are comparable to last season and suggest our end-of-season coverage among children will be approximately 60%. We can and should do better, anticipating that we may have another four weeks of the 2018-2019 influenza season.